Meet the Fleet: The Tech Behind the Inspection

That's why we use certain drones for certain jobs.

We wouldn't use the same drone to inspect the colossal towers dotted across California that we would to look at the underdeck of an offshore oil rig in the North Sea.

So, today we’re inviting you to meet our fleet, our trusty and loyal guard, and learn a little bit about what they do and how we use them.

By far the smallest of the Cyberhawk fleet, this tiny tyke is used primarily when we’re interviewing new pilots to see where their skillsets lie, or during the very initial stages of training before moving onto larger drones.

We chose the Hubsan 107L for this purpose as its small, hard to cause any damage with and is virtually indestructible itself.

We use the Hawk for the next stage of pilot training. Its purpose is to make pilots aware of the potential danger that flying a larger drone can carry and the consequences that can arise if not given the appropriate level of diligence.

Because this drone is equipped with four 5” polycarbonate propellors and only limited flight stabilization – it makes a perfect use case for pilots looking to get to grips with operating a scarier drone!

Otherwise known as the workhorse of the fleet, the Falcon 8 – formerly made by the now defunct AscTec – is our current go-to for most jobs. While some drones might be able to fly longer and others are more portable or can carry more, the Falcon is the best all-rounder we have and continues to bat off newer competition.

Such is the evergreen adaptability of the Falcon, it’s used in many varied jobs, including overhead line and wind turbine inspections, small surveys and offshore underdeck inspections for oil and gas rigs.

And while all this is all very impressive, perhaps the standout feature of all is the Falcon’s revolutionary ‘v’ shape. Unlike other drones, its shape makes it impossible to accidentally catch any intruding propellors in its visual periphery when shooting footage from an accompanying camera. The Mavic is unique amongst the rest of our fleet as it is used almost exclusively for capturing video.

Built with that in mind, it is very portable and can shoot in glorious 4k.

In terms of inspection work, the Mavic is perfect for capturing video as part of a land survey and beyond that, is our go-to for shooting any Cyberhawk marketing footage we need!

This drone comes with the envious tag of being ‘almost uncrashable’. Thanks to its on-board ‘360-degree obstacle avoidance’ technology, the Skydio 2 knows where it is in relation to surfaces at all times.

But not only is the drone almost uncrashable, the accompanying technology helps it to operate fully remotely and can complete full 3D scans of objects totally autonomously. Here we took this fully autonomous scan of one of the climbing boulders that sit below our UK office.

One of the newest additions to our fleet, the M300 from DJI, is a bit of a monster. Not only can it boast long flight times of around 45-60 minutes, its classification as a heavy lift drone means that it can carry and operate hefty payloads.

We’ve used this drone all over the world but most significantly in California, where we inspected 10,000 of the monumental towers that exist there.

A very popular drone, this is another that features heavily in our US work. Because it’s fast and very portable (it packs away well and uses very lightweight batteries), that makes it a great choice, not only for lots of inspection jobs – such as powerlines and tower work – but also frequently in the world of cinema too.

Its considerable pace means that it’s used often in action films for scenes like car chases. Fun fact: Entire films have been shot on the Inspire 2!

The Elios 2 was designed with internal inspection in mind. There are LED lights positioned all over it, which means its pilot can see in the dark at all angles, even in very confined spaces.

As well as lights, the drone also has infrared rangefinders to help it establish where surfaces are and how far away from them the drone is.

These features allow the drone to navigate through dark and dirty environments with ease, such as inside tanks or pipelines.

Unlike most other drones, this one is protected by a spherical cage, which means that it’s almost impossible for its propellers to be damaged mid-flight - and therefore can’t fall out of the sky! The Elios 2 in action inspecting the inside of CononoPhillips Polar Tanker.

Definitely the most on-brand of our fleet! The Acecore Zoe is our most recent addition and one we have big plans for. Watch this space! 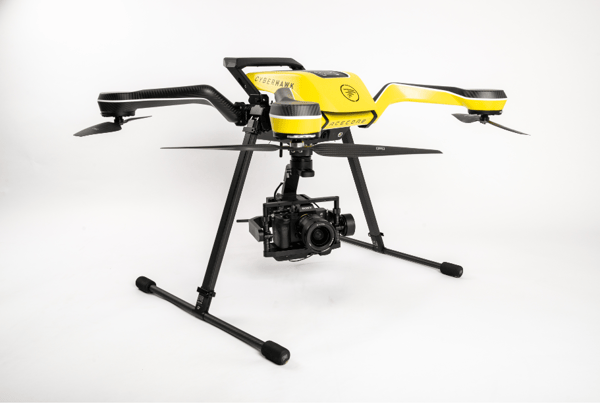 Perhaps the most unique of all our drones, the Atmos Marlyn is a tail-sitter, which as the name implies, means that it sits on its tail during take-off and levels off in the air, before landing on its tail again.

But while also being a tail-sitter, it is also a fixed-wing drone. This gives it a much longer flight-time than traditional drones and flies at a higher altitude, thus making it perfect for surveying as it can cover a significantly more ground from higher up and does not need to land for battery changes.

Footage of the unique take-off style of the Atmos Marlyn.

Did you know? Fixed-wing aircraft can fly up to 10 times longer than traditional multi-rotor drones. Most fixed-wing UAVs can easily fly a 250-1000+ acre plot on a single flight.

If you would like to learn more about our drones and the fantastic work that they do, you can do so here.