Scott's Story: Made in the Royal Navy, now flying high at Cyberhawk

When Scott Gardiner’s eight-year career in the Royal Navy came to an end, he knew his next role would need to be just as exciting, challenging and rewarding. Becoming a drone pilot ticked those boxes, opening the door to a new career with opportunities for training and international travel. 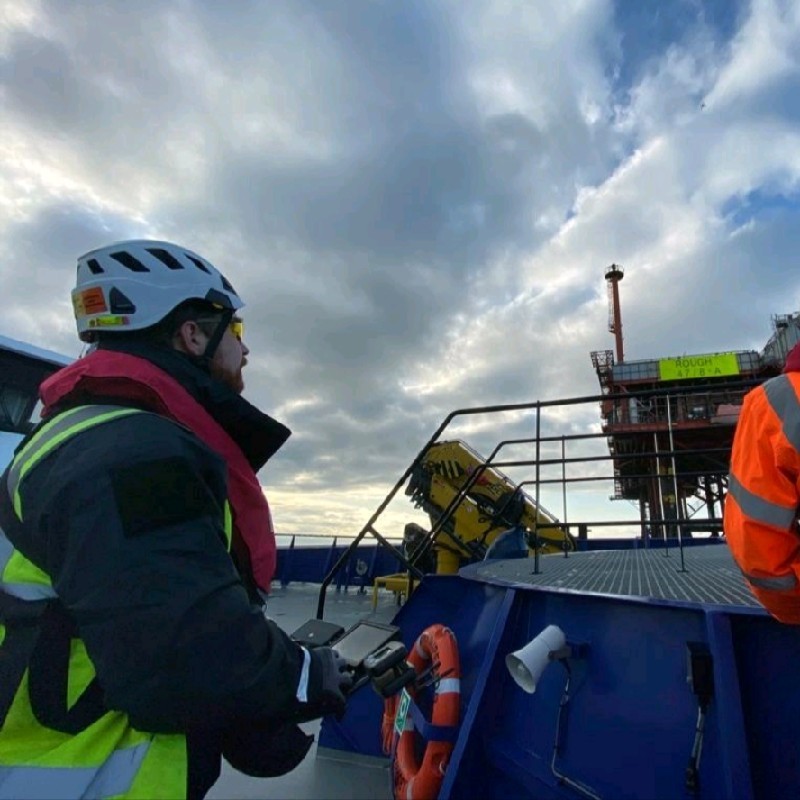 Can you tell us a little about the career route you took to becoming a drone pilot?

After spending eight years in the Royal Navy as a clearance diver, I felt the time was right to move on. I wanted to find a role where I could apply the skills I’d learnt over time.

In the Navy I was tasked with bomb disposal and using land-based robotics and drones, and so an engineering type role seemed like a natural fit.

As it happens the Royal Navy offered a training allowance which could be spent on a course approved by Enhanced Learning Credits Administration Services (ELCAS). I completed a project management course as well as training that would allow me to use drones commercially as part of my personal focus on upskilling at the time.

After completing those courses, I noticed Cyberhawk were recruiting and that the job ad didn’t mention specific field experience, rather they were looking for the right person, with the right skills and attitude. That was over a year ago, and the rest is history!

What first attracted you to the role?

As a Scot myself, the fact that Cyberhawk is a homegrown, successful Scottish company was appealing. When I first joined, I was based at the company headquarters in Ratho, Scotland, whilst I completed necessary training. The short commute from home afforded me a good work-life balance with more time spent with my wife and kids.

Longer-term, I wanted to join a company where international travel was on the cards. As a global company operating in over 37 countries, Cyberhawk offered this.

Also, the ability to use a remote means of inspecting in industries that I understand, from working on an oil rig to inspecting a tower in a field, was attractive. Coming from a role in the Navy, it was important to me that I would be able to work on diverse projects across different sectors and continuously learn.

Which skills did you learn in the Royal Navy, and how have these enhanced your current career?

It may sound like a cliché, but communication was essential in the Navy, as well as being able to work well alone and as part of a team. And with working as part of a team comes the need to build high levels of trust.

These are integral skills at Cyberhawk. The working environment out in the field can be noisy and high risk so you must be alert for safety risks at all times, and able to take care of your colleagues and communicate well to avoid any incidents.

And I can’t forget, time management! In the military if you are late, there are consequences! That stays with you for life and can be a useful mentality. As a drone pilot, you often have tight windows to get the work done so being able to manage your time effectively is key.

Can you describe your first three months at Cyberhawk?

Having some experience of drones, I was keen to get stuck in right away but before diving in, myself and other new recruits were given a comprehensive in-house training schedule.

This saw senior pilots at Cyberhawk act as mentors and guide us through the use of different drones, each a different size and difficulty level to control, over the course of a few months.

Initially, we would go through the fundamentals, starting out by flying a small drone indoors. There was always an experienced pilot nearby if we needed assistance, but it was great that Cyberhawk gave us the space needed to train solo and build up our confidence.

What I enjoyed about those early training days was that we made it fun. We turned it into a game, playing races for example and testing how far we could fly around obstacles. Before you know it, your muscle memory has kicked in and instead of thinking about the movements, you are instead considering where you need to fly to and how to do this in the most efficient way.

Once you’re comfortable flying the smaller drones, you progress to the more advanced ones, which can be quite aggressive meaning a lot more control is required and we would take the training outdoors. This would provide a more realistic setting with trees and tyres to navigate, and the impact of weather to consider.

We would need to build up around three to four hours of flying per day during each training stage, and pass a competency test, before moving onto the next.

A high level of knowledge and competency was needed until we could progress to using commercial standard drone, which comes with the need to use different software.

It is reassuring that Cyberhawk would never send anyone out into the field without them being ready. The team encourages you to advance quickly to the highest level so you can work on live jobs, but how fast you progress through the training programme is very much determined by your ability.

Was there anything that surprised you when you first started out as a drone pilot?

Flying for three to four hours a day may not sound like a lot, but it was intense. You need to be careful and pay a lot of attention. It was more tiring than I would have expected, you are using your brain a lot!

Now that I am qualified and working in the field, this has not changed. The constant level of attention needed can be mentally demanding.

I perhaps underestimated how physically demanding the job can be, as well as mentally. In the first six months of field work, you are more likely to be assigned to inspecting power grid infrastructure, simply because that is where you hone your flying skills.

The transmission towers in Scotland for example are often located in remote areas so it can be challenging to get there, it takes a level of physical fitness. The weather can also be extreme – you’ll find yourself sweating in summer and freezing in winter!

And, although working internationally is a huge bonus in many respects, it can also be difficult. Many will find it easy to work away from their home comforts and loved ones for weeks at a time but when this is extended it’s a different story.

I have been working in Korea since July and I do miss my family back home. When you’re travelling abroad with work unexpected things come up, delays to project timescales for example. No one could have predicted the pandemic and how this would alter day-to-day-life. Myself and my colleagues working abroad during this time have had to acclimatize to not only a different culture and language, but to long periods of lockdown and isolation when socialising and sightseeing isn’t possible, which has been hard. Although there’s no shortage of baseball on the TV here to distract you!

All these factors combined makes it incredibly important to be passionate about the work and enjoy what you’re doing because the working conditions, although often exciting and rewarding, can be challenging and unpredictable.

If someone was thinking about becoming an industrial drone pilot, what advice would you give them?

I’d say, don’t be nervous about applying! Don’t be put off by thinking you need commercial drone experience. Cyberhawk operates in many industries and it’s unlikely you’ll have experience in all of them. The Cyberhawk team are from a very diverse background from military to all sectors, and everyone has had to learn at some point.

If you are willing to learn, you’re a team player and open to working in challenging environments, then go for it.

At Cyberhawk, more emphasis is put on personality, ambition and having confidence in yourself than years of experience on your CV.

My advice for anyone actually starting out in a pilot role would be to communicate with the team. There’s that saying, no question is a stupid question, and it’s true! Especially when you’re learning. If you’re unsure what is needed on a job, ask! We’re fortunate that we have a wealth of knowledge within the company and everyone is willing to help, an answer is usually only a WhatsApp message away whenever you need it.

One of our values is centred around ‘using the team around you’, and the support really is there if you are willing to ask for it.

What’s next for you?

I want to be exposed to more customer projects, working across more sectors.

Experiencing lockdown in another country hasn’t put me off travelling either, I’d like to work in different countries and see where that takes me.

There really are lots of opportunities with this job!